After a much longer gap that I anticipated, I continue writing about my 'exhibitions tour'.

The next stop after Bletchley Park was Stratford-upon-Avon, birthplace of Shakespeare.  We did a tour of the new theatre, which has been rebuilt over the last few years, and in the evening we went to see a play - not a Shakespeare one! - but The Heresy of Love, written by Helen Edmunson, about Sor Juana Ines de la Cruz, a Mexican poet and writer of the 1600s, who became a nun in order to keep her intellectual independence, and although first supported by the church and nobility was eventually destroyed by the church and the inquisition.  Fascinating, very powerful stuff.  In fact years ago I saw an Argentine film about the same story, directed by Maria Luisa Bamberg, and titled "I, the worst of all", which were the words she had to write when she 'confessed' to have been wrong to believe that she, as a woman, could use her intellect.

Here is my almost 'wordless Wednesday' picture, taken in Stratford-upon-Avon. 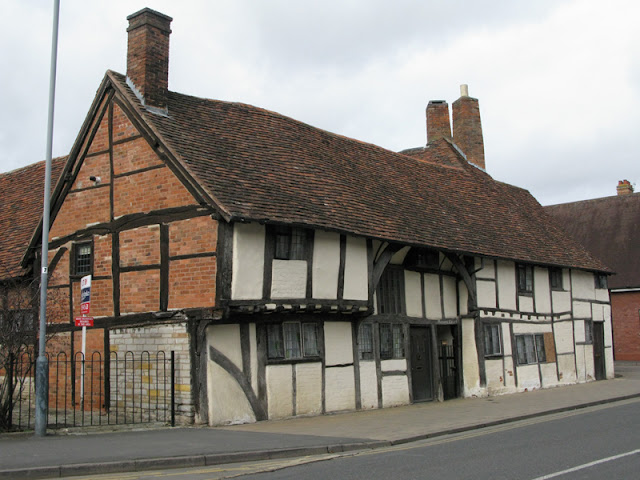 The next day we went to Leamington Spa, which is still in Shakespeare country, about 30 minutes' drive away.  There we visited Leamington Spa Museum and Art Gallery, a beautiful building in a park - it used to be the old spa - with a large, beautiful temporary exhibition space, where Annabel Rainbow is organising an exhibition next October to January - Through our Hands - at the request of the museum.  She wants to bring art quilting to the attention of the general public, and to this effect she asked some well known quilters to join her in the exhibition - I was very lucky to be asked to join the group.  The other artists are:  Sandra Meech, Elizabeth Barton, Elizabeth Brimelow, Bethan Ash, Linda and Laura Kemshall, Dianne Cevaal, and Eszer Bornemisza.  I am delighted to be in such amazing company!

Alicia
Posted by Alicia Merrett at 00:44