Last weekend I went to London on an exhibition-visiting expedition. Plus meeting friends.

On Sunday I went to Tate Modern and saw the Paul Klee exhibition - "Making Visible".  Marvellous! There was a lot of work I wasn't familiar with.  His output was prodigious - he made thousands of paintings and drawings.  Mostly quite small.  The exhibition is arranged chronologically so you become aware that in the same year he was working on several series at the same time - for example, oil paintings in colour, and drawings in black and white, plus various mixed media pieces.

I also saw the exhibition by Mira Schendel, a little known artist whose work fascinates me.  Born in Germany, she lived most of her life in Brazil and that's where she produced her wonderful work.  She worked a lot with letters and messages. 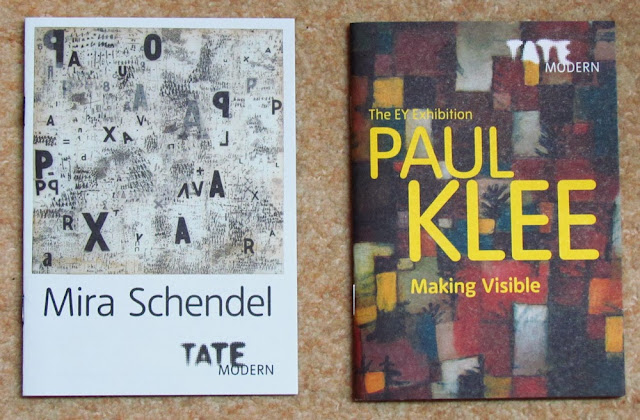 (No photography allowed in the galleries...)

I bought some books by Klee, as well as the massive catalogue, and should be reading his thoughts for the next while... 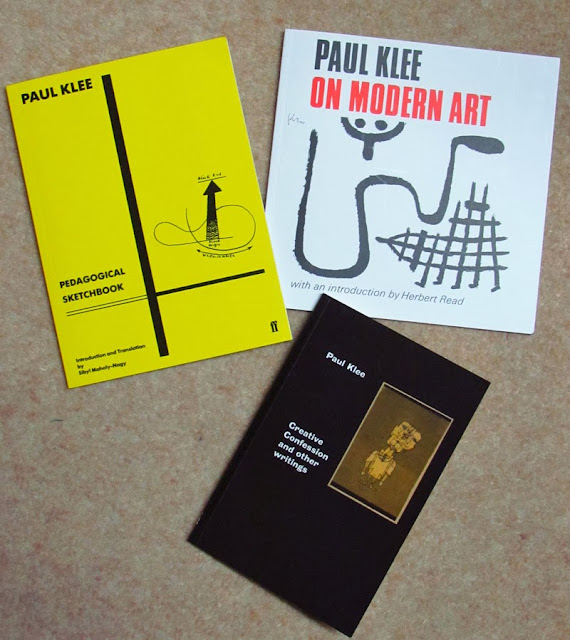 On Monday I went to the Science Museum to see the "Collider" exhibition.  It is about CERN and the Large Hadron Collider, where recently the new particle, the Higgs Boson, was discovered.  Professor Higgs (who has just won the Nobel Prize for Physics), and Stephen Hawking, were at the Museum at the opening a few days previously.

It is a most fascinating exhibition.  I have to confess that I am a science addict, particularly loving exploring the two universes - the big one, of giant stars and galaxies, and the subatomic one of amazing particles.  Aversion to Mathematics stopped me from studying science - when I was 13 I wanted to be an astronomer...  These days I avidly watch many relevant TV programmes on those subjects ("Light and Dark" is the latest), and I bought at the museum, and have already read, a booklet on the Higgs Boson.

Science relates to art.  Albert Einstein used his imagination to visualise some of his theories. He said:  "After a certain high level of technical skill is achieved, science and art tend to coalesce in aesthetics, plasticity, and form.  The greatest scientists are artists as well."

More concretely, I have been invited to participate in an international quilt exhibition on the subject of "Radiation", which will open in Geneva (home of CERN) next June. Kate Findlay, who made the Large Hadron Collider the subject of a wonderful quilt series, is participating as well.

That leads me to the last exhibition I visited - on Tuesday - "Water Water" in Henley-on-Thames, organised by Kate.  It was a wonderful exhibition - now closed - with a huge variety of interpretations of the theme. Here are a couple of general photos of the work in the gallery. 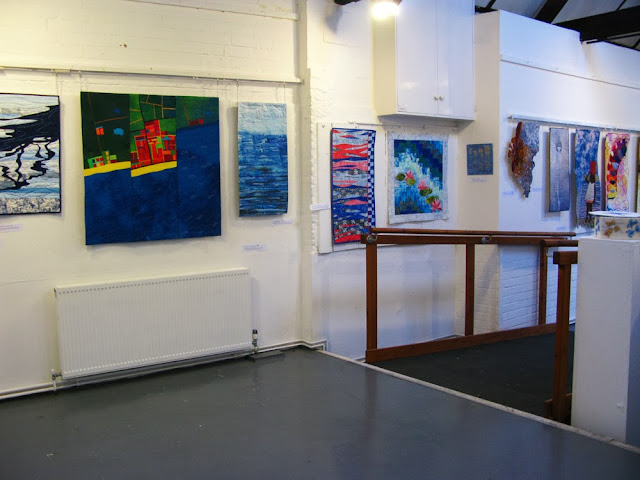 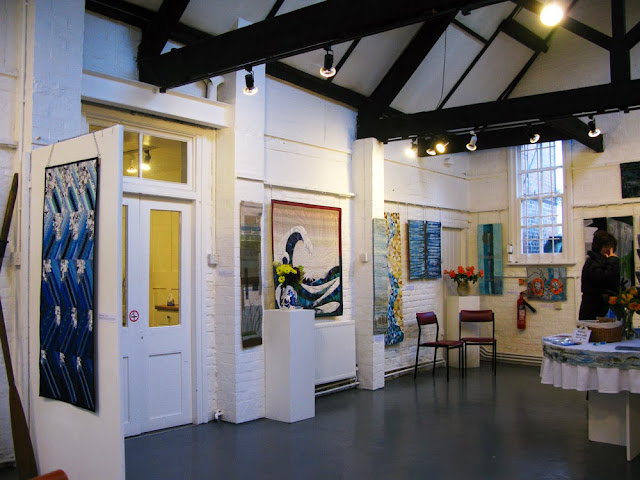 The other two exhibitions are open until at least next March, so don't miss them!

Well, here I am, posting on two days running after an absence of two and a half months!

This is about the exhibition Water Water, organised by Kate Findlay in Henley-on-Thames.  It promises to be very good - I will have a couple of pieces in it.  Dates are 14 to 19 November.  Full details on the leaflets below. 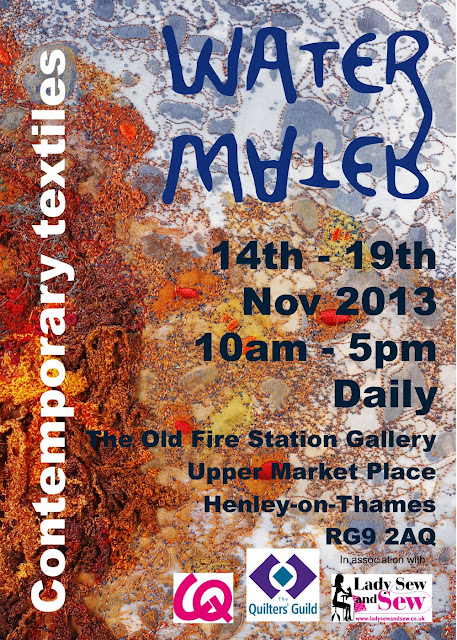 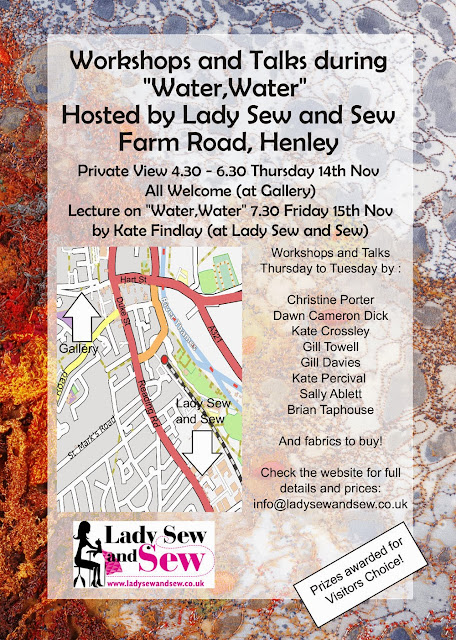 I shall be visiting the exhibition on the last day.  Do call if you are near enough.


Posted by Alicia Merrett at 23:08 No comments:

A big quilt and a rainbow

I have not posted anything in this blog for two and a half months.  That is a long time!  It is in fact the time that it has taken me to finish my quilt for SAQA's Earth Stories project.  It is 72" square and I cannot post a photo of it - it is embargoed until the opening of the exhibition, which will be in early May 2014 at the University of Michigan Museum.

Earth Stories is a fascinating project.  First, because of the theme - positive stories about the Earth.  Second, because of the way it was organised - entry requirements were a portfolio of work, and a project proposal.  From those, 25 SAQA members were selected to carry out their projects.  There are many North American artists in the list, but also several from Europe, the Far East and the Middle East.  I am very proud of being one of the group.

The project has been fascinating to carry out, because of my own research into the subject, and because of observing the projects by the other group members - a wide variety of very interesting things.  There will be a catalog, so a much wider number of people will be able to see what it was done.

My project was about the protection of endangered species in the nature reserves of the Somerset Levels, in the UK.  The reserves convert old peat bogs and unused land into a variety of habitats suitable for species ranging from beetles to bats, from dragonflies to otters, and more.  They are managed by specialists but staffed mostly by committed volunteers.

As I cannot post photos of my quilt, I will entertain my visitors with other photos - today with images of a beautiful rainbow caught on the road on the way home a couple of weeks ago. 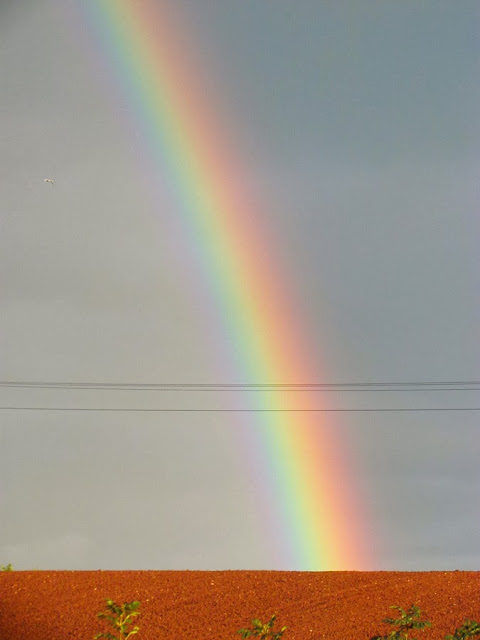 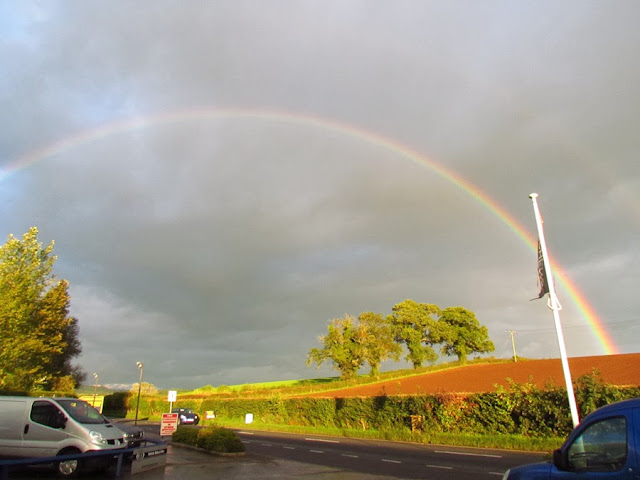 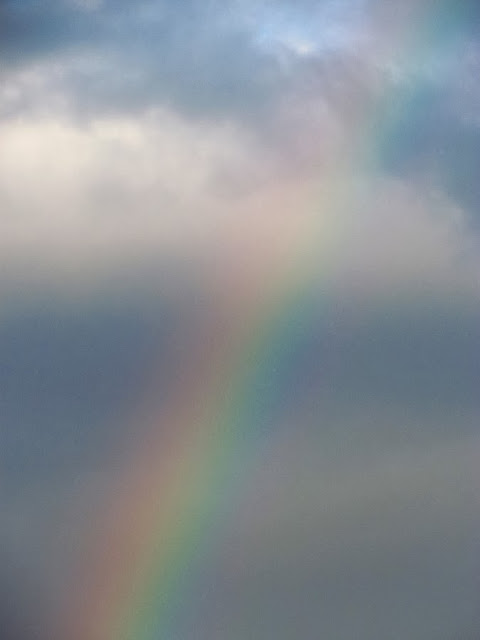