My work at Black Swan Arts


Black Swan Arts is a forward-looking, long-standing, hard-working for the arts, local art gallery within an arts complex in the town of Frome, Somerset, UK.

Black Swan Arts have an annual Open Arts competition/exhibition, which is open to all artists, not only  those from the South West of England.  I am pleased to say that I have had a piece accepted this year (the third time I entered, and the second time I got in), and it is now on show in their building.

My work is one of only two textile pieces in the show - and the only quilted hanging. The majority of the works are paintings, sculptures, glass, photography, ceramics, with a sprinkling of mixed media of various types, some using fabric as one of the elements.  Although the majority of the works are in more traditionally 'arty' materials and categories, there are many 'cutting edge' works.

It is certainly worth visiting, if you are in the area. The exhibition is on until 25 May.  Open 10 am - 4 pm Monday-Saturday, closed Sundays.  There is a big public car park next door, and the lovely Divas cafe in the building, on which walls some of the art exhibition is hung. "Seeds", a studio crafts shop, and several individual artists' studios, as well as an open studio space which can be used for workshops, complete the complex.  Plenty to view! 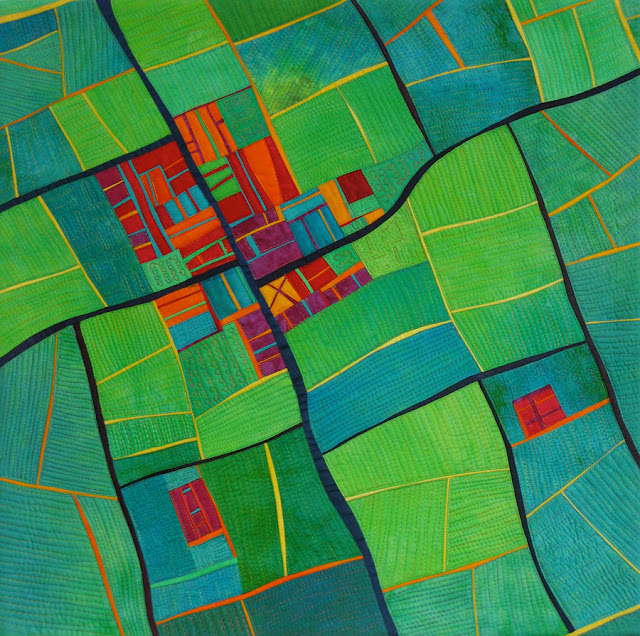 "Mapping Earth", above, is my piece in the show. I have mounted it on a canvas stretcher, which makes it look more substantial.

It is always worth entering local art shows - textiles are sometimes accepted. And they are always popular with the visitors!

I'm having an exhibition on the cafe area walls of the Red Brick Building, Morland Road, Glastonbury, Somerset, BA6 9FT, together with painter Jenny Graham.  It is on until 12 May, so there is still time to visit.  Open Mon-Fri 9 am - 4 pm, closes 3 pm on Saturdays, closed on Sundays. Free  parking.

Because of this, Jenny and I were interviewed by the local radio, Glastonbury FM, in a programme about business - the interviewer wanted to talk about 'the business of art' - very interesting!  If you live in an area within 10 miles of Glastonbury, you can tune in to gfm - 107.1 fm, but you can listen to it via the internet anywhere in the world.  Just go to their website, www.glastonburyfm.co.uk. 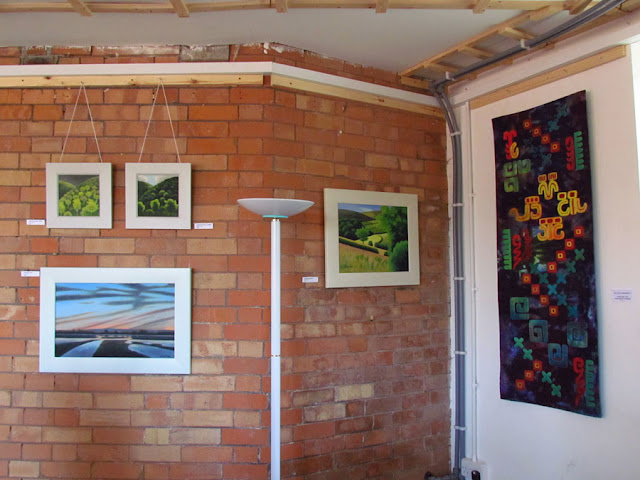 Posted by Alicia Merrett at 10:02 No comments:

For some time I've been intending to transfer my old slide shows to digital presentations, and create some new ones.  I'm pleased to say that I've started!  My first move was to buy a digital projector, the best I could afford for projection of photographs.  There is a bewildering array of choices, and I found an online specialised seller that I could phone and get advice from.

The second step was to start creating slide shows.  I already have one digital presentation which I created years ago, A Passion for Colour, which was done in PowerPoint, and it took quite a lot of time to build.  This time I needed to be able to build "My Journey As A Quilter" in two days. So how to go about it? Solution:  do it on my iPad using Apple's Keynote programme (available from the App Store). I already had it, so I started by reading the instructions and found them very intuitive.

I had to make sure that the photos I wanted to use were actually in the iPad, so I transferred them from my computer, which in any case is an Apple one. Then I built my new presentation.

If you depend on other people's projectors, and have a PC rather than an Apple computer, the Keynote presentation can be saved as a PowerPoint one, and transferred from iPad to computer via iTunes. Once downloaded into the computer,  it can be saved, and then burnt onto a CD, or transferred to a data stick, or shown directly from your PC.

But the best and easiest way is to simply connect the iPad to the projector. For that, you will need a special cable, as the iPad does not have the same plugs and sockets that the projector cable has.  There are various alternatives for different connection systems, but the one I bought is an "iPad to VGA" cable.  I plug the VGA end to the projector's connecting cable, the iPad end to the iPad, and then plug the other end of the combined cable system to the projector.  Turn everything on, and hey presto! the projection starts.

I had also had great fun playing with the transitions between slides.

Now I've got to create some more shows. I can see possibilities for workshop use too.  I take my iPad to classes to show students various photos, but taking the projector will be even better.  It is very light (I chose a portable one) and fits neatly in a carrying bag with all its cables.

I recommend giving this system a try!