Today we went to see the annual Bank Holiday Moat Races around the Bishop's Palace in Wells.  They were a lot of fun, like always.  They have hilarious groups of participants rowing their barely 'sea'-worthy rafts through various obstacle races, but they have the time of their life while making a contribution to the life of the town and to several charities.
The place was crowded with families and children, as well as plenty of 'oldies' like us.  There were stands of various kinds (from food to fair trade goods to energy saving, and many more), bands playing in the bandstand, amazing drumming workshops, inflatable slide runs and merry-go-rounds for the kids, overhead  flying of Spitfires and other such aeroplanes, and a general atmosphere of friendship and fun.
Here is the winning raft - Titanic - rowed by air cadets. 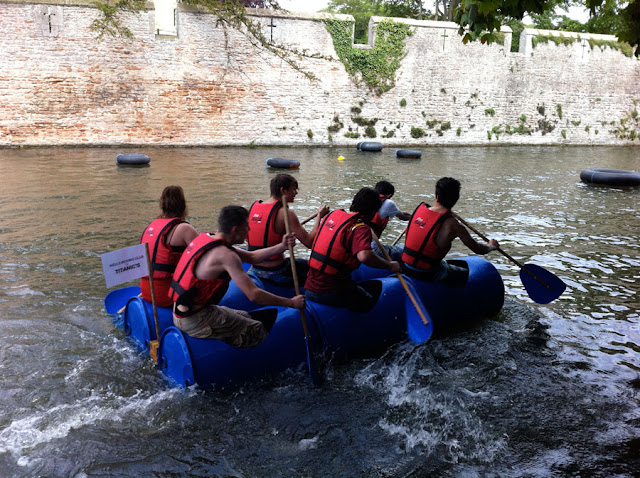 And this is the more usual look of the race - the rafts piling up while trying to go round the obstacles.... 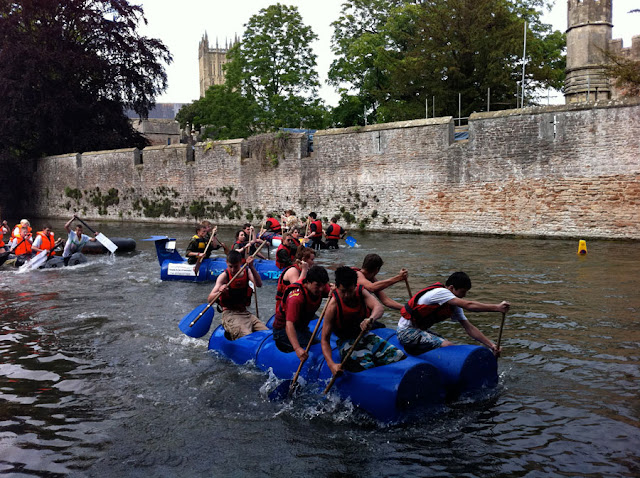 The raft-rowing groups were often dressed up and had names such as The Irish Draft (with a raft made up of Guinness barrels), The Breakfast Boaters, The Hollywood Crowd, etc.
That was my break today, having spent the rest of the day packing my quilts in boxes, ready to be shipped to France for my exhibition at the Carrefour du Patchwork in a couple of weeks' time.
See you soon!
Alicia
Posted by Alicia Merrett at 23:50