One of my New Year resolutions is to re-start writing regularly in my blog; and of course displaying photographs. So here I am.

First, a Review of last year:

It was a very successful year for me. I had work on show in Germany (solo gallery at Nadelwelt Karlsruhe), Spain (gallery display at Interquilt Girona), and individual quilts in many juried and invitational exhibitions - in the UK, Europe, USA, Australia, South Korea, Taiwan, and China. I won't list them all in detail, but I am especially proud of being juried into the Wayne Centre's Art Quilt Elements, SAQA's Concrete and Grassland, and Australia's a matter of time.

Other proud moments were winning an award at Art Quilt Elements at the Wayne Centre, Philadelphia, especially as I was there to receive it personally! And being invited to show at the Korea Bojagi Forum, and at a quilt exhibition in Shanghai, China.  With my group Viewpoints 9,  I exhibited at the Taiwan International Quilt Exhibition (TIQE), the International Quilt Festival in Houston, Texas, and several venues in Australia and NewZealand - still ongoing. I couldn't attend those, but in April 2016 I did go to my first SAQA Conference, in Philadelphia, which was a great experience, and a wonderful opportunity to meet internet-based friends. 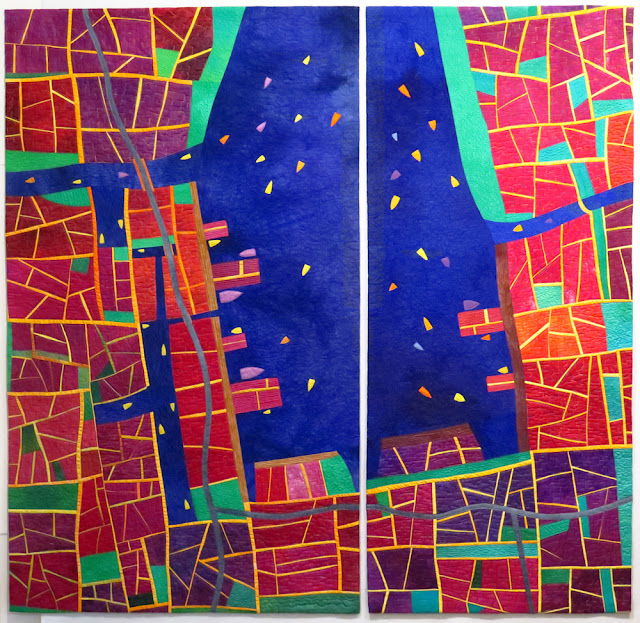 Port at Dusk Diptych is so far my most successful and popular quilt. It is the one that received the award at Art Quilt Elements, and before then, in 2015, it was on show at Through Our Hands's The Liberated Quilt at the Bilston Gallery in Wolverhampton, and then at Fine Art Quilt Masters at the Festival of Quilts in Birmingham. In 2016 it travelled to Philadelphia and to South Korea.

And in 2017 Port at Dusk Diptych will be on show at the New Bedford Art Museum/ArtWorks! in New Bedford, Massachusetts, from 25th January to 19th March, as part of the 50 textile pieces selected for Excellence in Fibers, organised by Fiber Art Now magazine.

Moving onto 2017, I have been invited to participate in New Quilting, an exhibition organised by the  Rheged Centre in Penrith, Cumbria, from 3rd March to 23rd April.

There are more exciting things in the pipeline, including teaching abroad, but I will mention those as appropriate in future posts.

Happy New Year to everybody!