How long does it take to make a quilt?

A quilter I know has asked me in Facebook: How long does it take you to make a quilt? My first reaction was to say: How long is a piece of string? But that's not a helpful reply, nor an accurate comparison.

However it is a question many quilters are asked. So this is what I replied:

The actual making takes me a few weeks - depending on the size of the quilt - say between 2 and 8 weeks (and I may work between 3 and 6 hours in a day, and not every day). But the gestation period may take any amount of time - from getting a sudden idea, fully formed, to weeks of research and pondering, in other cases. Both the 'speed' and the 'getting the idea' come from working and more working - spending time in the studio - perspiration as well as inspiration. It's all in Malcolm Gladwell's book 'Outliers' - to get good at something you need to put in 10,000 hours work. Do read it!

As I think it's an important subject, here are some additional thoughts:

When I started quilting, in the 1990s, making a quilt took me an awful lot longer - months rather than weeks, up to a year for a really big quilt. You speed up as you practise and the techniques become familiar. Ideas also come more quickly. And if you concentrate on a few techniques, rather than trying something different every time, and work in series, that also speeds up matters. If you produce work faster, you are inclined to make more work. An upwards spiral! You may get stuck occasionally - it happens to everybody - and the best solution is to keep making, even if you are not completely happy with what you produce, rather than freeze and stop. You need commitment too, obsessiveness you may say.

So if I reply to the original question by saying that a particular quilt took me X weeks to actually make - and that may sound rather a short time (see caption to the photo below) - I'll be missing out mentioning how long it took me to think through the idea beforehand, and also that I first needed to have those 10,000 hours of practice...

So get on working! Happy quilting! 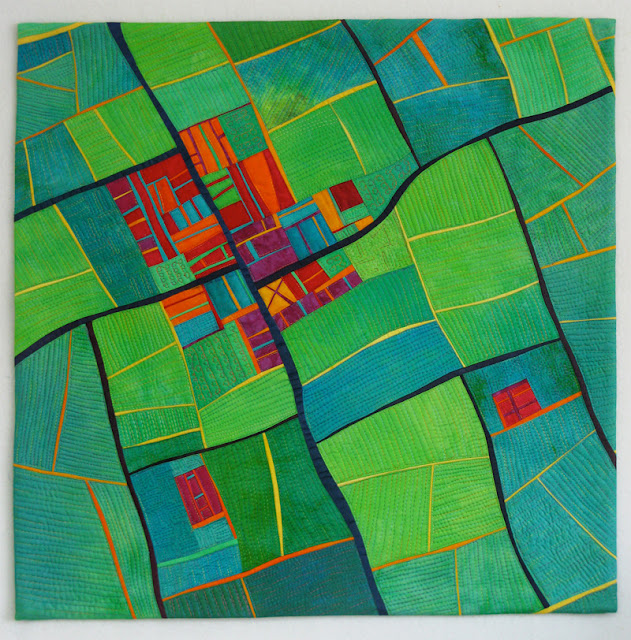