In his seminal book The Elements of Colour, Johannes Itten talks about The Seven Colour Contrasts, and emphasizes that "each one is unique in character and artistic value; in visual, expressive and symbolic effect; and together they constitute the fundamental resource of colour design".

Quite big words to express something that when explained, much of it will look familiar;  but some of it less so.  Itten lists the seven colour contrasts as follows:

1.  Contrast of hue: for example, yellow, red and blue.
2.  Light-dark contrast: most clearly expressed with black and white.
3.  Cold-warm contrast:  a way of express something we are quite familiar with:  the cool feeling given by greens and blues, the warm emanations given by reds and oranges.
4.  Complementary contrast:  it refers to opposite colours in the colour wheel, which when mixed together as pigments, will yield a neutral gray-black.  They are opposite, but they are necessary to each other.
5.  Simultaneous contrast: the most difficult to understand, and the one I will talk about below.
6.  Contrast of saturation:  the contrast between fully saturated colours and their diluted versions (diluted either with white, with black, or with grey).
7.  Contrast of extension:  this refers to the relative areas of two different colours - the proportions of colours used in an area.  For example, an area of violet with a few touches of yellow will look very different to an area of yellow with some small dots of violet.

Now to SIMULTANEOUS CONTRAST.  Itten says:  "Simultaneous contrast results from the fact that for any given colour the eye simultaneously requires the complementary colour, and generates it spontaneously if it is not already present".

It is not something which is objectively present.  It is in the eye of the beholder - it is generated by the eye and brain of the viewer.  It can be explained by doing an experiment that many of us would have done as children. 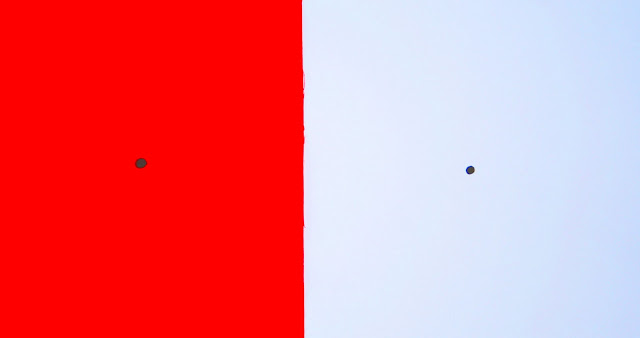 Immediately after look at the right hand white square.  You will see a pale green or blue-green square.  That is your eye and brain generating the opposite colour to red.  We call it an afterimage.

Now, if the right hand square was green or blue-green, rather than white, and you did the same experiment, you will be very unlikely to notice the green afterimage.  But the fact that you don’t see it doesn’t mean that it is not there – it is.  When the eye moves across the colours in a piece of work, or fabrics, or anything else for that matters, it sees not only what it is viewing, but also the afterimage of the colour previously seen.  All the colours you are seeing are tinged by their complementary colour, generated by your eye and brain.

This effect, called simultaneous contrast, affects everybody’s colour viewing, and can be used for all sorts of effects by artists – whether in paint or fabric – to emphasize the intensity of the colours (as I do) or to tone them down.  Robert Delaunay is particularly well known for consciously and expressly experiment with simultaneous contrast in his paintings.  But he wasn't the first:  Leonardo da Vinci noted that adjacent colours seem to influence each other;  and the French chemist Michel Eugéne Chevreul studied it thoroughly and published a book about it.

There is a lot more to it, but that’s enough for today!
Thanks for visiting!  See you soon!
Alicia
Posted by Alicia Merrett at 01:48